Back in the day, the only lights you’d see at concerts were the bright strobe lighting of the stage, spotlights and the glow of people’s cigarette lighters sweeping arcs in the air during a powerful ballad. The fun police came in and killed the lighter movement. (Open flames in close proximity of crowds was probably an OH&S thing). Now, the brightest lights at concerts are the gleamings of people’s backlit display iPhones, digital cameras, digital camcorders and mobile phones.

In the 90’s the light coming off a camcorder display or camera flash was so bright and beaconing it was enough to get you pounced on by security and turfed out of the venue. Not before, they dramatically exposed your 35mm film or stomped on your VHS-C tape.

The benefit of word of mouth promotion
It seems in these modern times, the idea of concert recording and its dispersion on the Internet is acceptable. I’m glad that concert promoters can see the benefit for their artist in the viral and self-promoting nature of social media.

Why bother advertising when your artist’s fans can do all the legwork for you? What do you have to lose? It increases the coverage through word of mouth, inspires further ticket and record sales. It feeds the hungry media beast.

The sharing communities on such sites as Facebook, Twitter, Flickr and especially YouTube encourage the spreading of content. Attending a concert now seems more about a competition of who has the best recording equipment and who can get the content online the fastest and garner the most hits. If the concert is being professionally recorded to sell as a Live DVD or album, then issues of copyright come into play.

Case in point – Orianthi Concert, Live in Sydney
On Sunday the 9th May 2010, I was fortunate enough to see the very talented guitarist Orianthi live in Sydney. You might know her as the lead guitarist for the planned Michael Jackson “This Is It” concerts and subsequent doco-film.

I’ve been to quite a few concerts over the last few years including The Rolling Stones, The Who, Elton John, The B-52s, Robbie Williams, Kylie Minogue, KC & The Sunshine Band (in Vegas baby!) but due to my inability to justify spending more than $100 for a ticket I’m always in the nosebleed section. So taking photos is generally ruled out.

This time I managed to get 3 rows from the stage and only having to stand for 40 mins before the show to stake out my spot. I was using a run of the mill compact digital Ricoh. So here are some fruits of my labour. 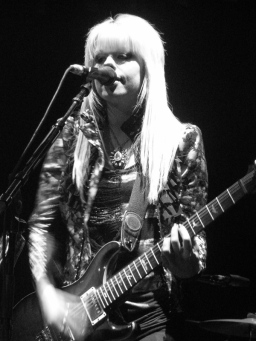 I converted this one to B&W in Photoshop using Channel Mixer. Note the blurred hand emphasising rapid movement. 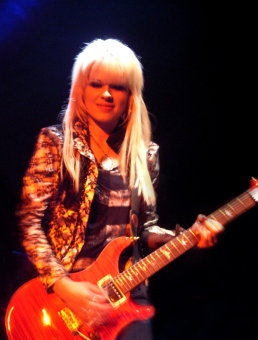 Somebody’s head was taking up the bottom right hand corner of this image and blocking the guitar so I airbrushed it out and cloned the guitar back in. Perfect. 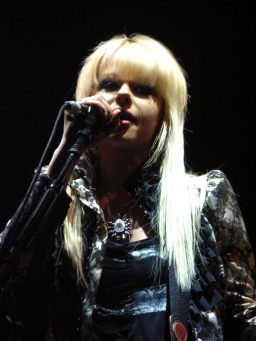 Effective use of optical zoom 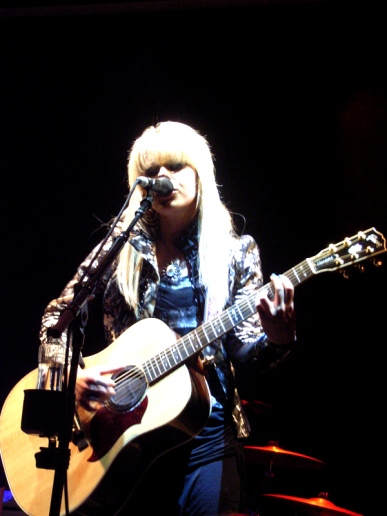 Waited for the white stage lights 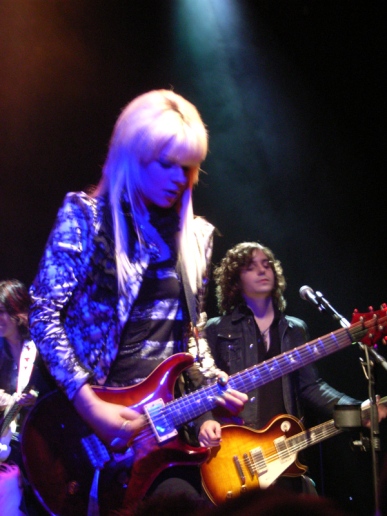 This is what I mean about strobe light effect. This is with the blue strobe

Some ideas when taking photos at concerts

Some ideas when taking video at concerts

Snaps where snaps are due
A fellow Aussie deserves some kudos, so here it is. Here is what is good about Orianthi:

1. She is a female rock chick. For some reason its assumed that women are incapable of playing guitar. Like her predecessors Jennifer Batten, Joan Jett, Bonnie Raitt, Sheryl Crow et al – she shows the guys how its done.

2. She is Australian. That’s right, from Adelaide, South Australia. She is strutting it on the world stage. Goes to show no matter where you grow up you can make a name for yourself.

3. She shreds. Shredding is difficult and to ad-lib shred really shows your connection to feel the music. I have no idea how she can play with her eyes closed.

and its worth mentioning she likes using the whammy bar and doing dive bombs.

Guitarist with L Plates on
I bought a cheap Fender Stratocaster knock off on Ebay about 2 years ago and proceeded to self teach a few basic rock riffs. I am highly talented in the iconic riff of China Grove (Doobie Brothers) which I proceed to play over and over and over again and then throw in a Smoke on the Water (Deep Purple) for good measure. I am still yet to get around to serious lessons. Its on the to do list along with a replacement amp for the one I broke. (Note to self: switch off amp before plugging in heavy metal distortion pedal). To think Orianthi is only a couple of days older than me makes me feel like a total dunce whenever I pick up the guitar.